From: Catfish Rising ; Year: 1991; Genre: Hard Rock/Progressive Rock Catfish Rising is an album that really takes me back, not to when it was released, but when I bought it and first hit play on the CD player. That would be somewhere around '99-'00 when I was working at a fast food restaurant and started purchasing music that I liked. If memory serves me correctly, I got this one along with the other 'Tull CDs Rock Island and Roots To Branches at the same time online from a website that I do not know if it still exists; for me it was a brand new thing to buy online at the time. Anyway, this is one of their albums that I like about half the songs on it; definitely not "album oriented rock." Occasional Demons was one of the top ones I really liked, it had a lot of wot I liked about the band at the time: the light and spacious sections of the song with Martin Barre's solos and the heavy rhythm section, and of course Ian Anderson still had a lot of power in hi
Post a Comment
Read more 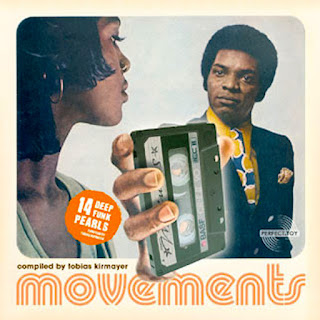 From: Movements ; Year: 2005; Genre: Soul/Funk Recently discovered this record and have immediately fell in love with it. Apparently it's kind of a "mixtape" of some very rare, deep cuts of funk, soul, and R&B among other genres compiled by a man named Tobias Kirmayer . I do not know who he is or a good portion of the artists on the album for that matter, but all I know is that I'm thoroughly enjoying it in the extreme. I'm just overjoyed that Mr. Kirmayer made this compilation and introduced myself and others to these rare tracks.   Hear Soul Popcorn on YouTube.       My song pick 1 year ago today: The Romantics - Talking In Your Sleep   My song pick 2 years ago today: The Kinks - Picture Book   My song pick 3 years ago today: Golden Earring - Radar Love My song pick 4 years ago today: Martha and the Vandellas - Nowhere to Run My song pick 5 years ago today: Blood, Sweat & Tears - Smiling Phases My song pick 6 years ago today: Rage Against the Mac
Post a Comment
Read more

5522. David Bowie and the Pat Metheny Group - This Is Not America

From: Still Waters Run Deep ; Year: 1970; Genre: Soul/R&B/Motown Yesterday marked yet another passing of a larger-than-life member of the music community, this time it was songwriter/arranger/producer extraordinaire Lamont Dozier of the Holland - Dozier - Holland songwriting and production team which penned some of the most important and famous songs to come out of Motown. The real sad part about it is that with so many legendary people involved with music are heading into their 80s and older I expect this to be a trend of sorts, but at least we get to keep their great work. Anyway, I felt like picking something from the Four Tops today anyway, so I went with this song that was written by Holland - Dozier - Holland and originally recorded by Diana Ross & the Supremes a few years prior, which is of course is the de-facto version of it. I absolutely love Levi Stubbs' vocals on this one; he, as always does an amazing job with his ultra powerful voice. Not to take away from A
Post a Comment
Read more

From: Physical ; Year: 1981; Genre: Pop/Rock Yesterday I woke up to find that Olivia Newton-John passed away, which for me was kind of like a "wow" moment. While I've not been a huge fan of her music and don't normally seek her music, there are times her music and other art comes into my mind and I have to hear it again. It's most likely due to hearing her so much back in the day when I was quite young; she was very famous and could be seen/heard almost in all forms of media back throughout the 1970s-1980s. Anyway, I had a couple of her songs come to mind for today's pick, but I just happened to remember this rather risqué song of hers and absolutely had to choose it. Throughout the '80s Physical seemed to be among her most played songs, which was actually banned in certain parts of the country. Interestingly enough, it was apparently written for Rod Stewart to perform, but her turned it down. Eventually it came to Olivia Newton-John and the rest is histo
Post a Comment
Read more

From: Love + Fury ; Year: 2013; Genre: Punk/Rock Have to say: the first time I heard this punk cover of the classic song from ABBA I didn't really like, but I stuck around for the chorus and then they won me over. It's kind of interesting how they were able to whittle about 1:10 off the length of the original and still essentially not leave anything out of the track; heck, they even "shoehorned" in a guitar solo, so, yeah, I'd say it's quite a successful cover song.   Hear S.O.S. on YouTube.       My song pick 1 year ago today: Maxine Nightingale - Right Back Where We Started From   My song pick 2 years ago today: Primus - Last Salmon Man (Fisherman's Chronicles, Part IV)   My song pick 3 years ago today: Paul Simon - 50 Ways to Leave Your Lover My song pick 4 years ago today: Michael Martin Murphey - Wildfire My song pick 5 years ago today: Alestorm - No Grave But The Sea My song pick 6 years ago today: Antoine Busnois - Gaude Coelestis Domina M
Post a Comment
Read more